One of the most common behaviors of natural systems is critical behavior. This behavior is meant to reveal events that follow the power-law rule. Some of the researchers believe criticality is a significant clue to recognizing complex systems. Studies of complex systems have been a major part of interdisciplinary sciences in the twenty-first century. It is generally accepted that Brain is the most important complex system in nature and has evolved over a million years. One of the fastest growing fields to study this complex organ is neuroscience. Throughout neuroscience studies, avalanche sizes and their duration have been interesting to scientists. The size and duration of such neuronal avalanches show scale-free (power-law) statistics, which can be considered as a strong clue to “critical brain hypothesis”. In other words, power-law behavior of brain provides strong evidence for its critical dynamics, which in turn provides a simple explanation for many functional advantages of the brain, including efficient information storage and transmission, optimal dynamic range, as well as stability along with variability. In this thesis, we try to study a top-down modeling (dHAN) which can model brain’s collective features such as associative thought process by its dynamics. The dense homogeneous associative network (dAHN) model of the brain provides a generic model which is independent of individual neuronal dynamics complications and can, therefore, be considered as a very general model of the brain with no regards to specifics. By the means of statistical analysis and finite-size-scaling method, we have shown while there is a specific balance between inhibitory and excitory factors, critical behavior appears in the systems. Furthermore, our findings show that if the excitory strengths decrease enough, the systems go to sub-critical dynamics with size-independent activity.
Comparing our findings to experimental data, accentuate the importance of critical behavior in neural networks by a general top-down model which apparently has no signs of criticality in its dynamics.

Below represents the numerical simulation written in C++ for a network contains 7 neurons.

Following figure is the plot for simulated node activities and their reservoir functions. The node activities are restricted in range of [0,1] due to the nature for the model. Horizontal axis is the time step 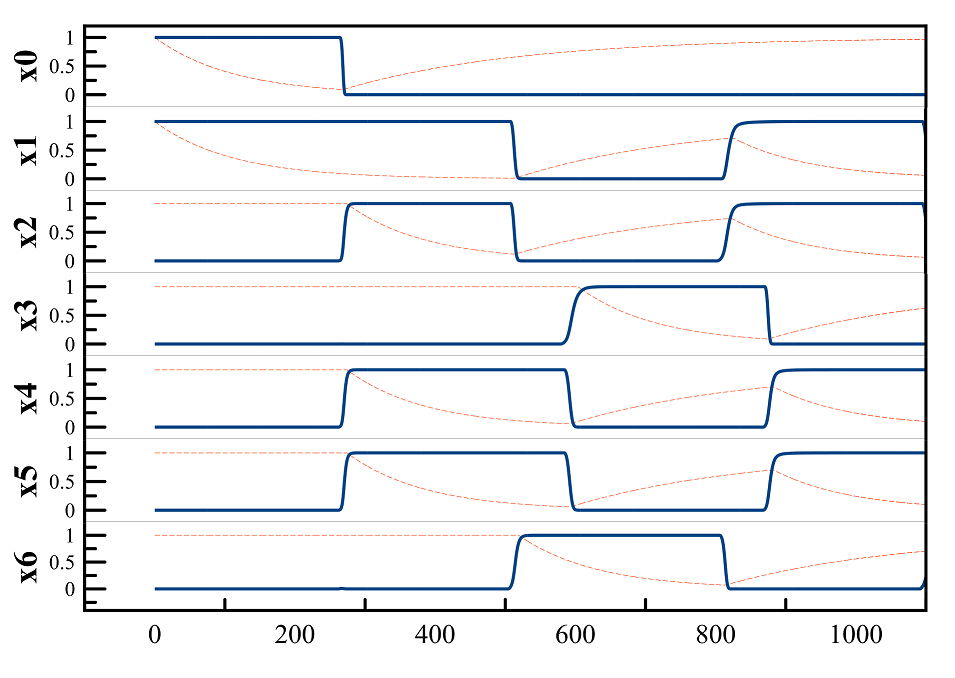 Below shows how avalanch size distributed in a logarithmic scale for all simulated network. In this research we also tried to tune the connection weight to check whether subcriticality and super-criticality would reveal.

This project published as a M.Sc. thesis in Shiraz University, and its based on numerical simulation for dHAN model of network of neurons.